I thought I found a bug testing blinking Txtzyme examples. Although I could see the Teensy LED blinks uniformly and distinctly, I saw the wrong number of blinks. It turns out the bug is in my brain, not my program, as this data shows: 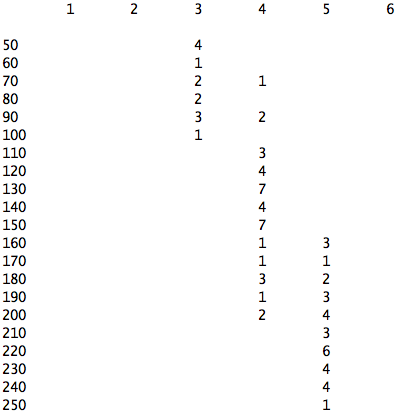 The data shows how many times I saw a particular number of blinks (the columns) when the blinks had a half-cycle period of a particular millisecond duration (the rows).

Here is the loop I used to acquire this data:

I'm using the mac's voice synthesis so that I can focus on the blinking. Any invalid response repeats the stimulus. This way I could watch the blink over and over until I was sure.

My brain bug is that although I perceive each light pulse clearly, distinctly and uniformly, my number perception drops pulses when they come too fast. I've measured my speed threshold to be around 200ms. I've tested others and found that this number varies.

I'll expect Dorkbot regulars to give this test a try at next Monday's meeting. I've also posted code and more results as another Txtzyme project on GitHub.