My friend Karl gave me an mpx4250 absolute pressure sensor that never got built into his DIY automotive super-charger. I hooked it up to SensorServer and started recording data that looks like this: 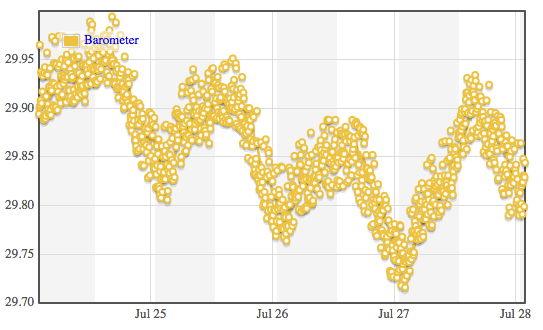 The sensor's four-atmosphere dynamic range leaves weather fluctuations mostly in the noise. But that doesn't mean some interesting things haven't shown up. For example, the above chart shows a diurnal variation that I now know is caused by Atmospheric Tides.

I'm pleased to be logging this data with Txtzyme which I have integrated into my SensorServer network. I've described my Sinatra based Txtzyme Remote project in a previous post. I added this code to that server:

This says, take 100 samples from channel 6 sampling every 150 microseconds or so. Average these and report the answer in a SensorServer-ready JSON key-value pair. (See code, graph)

Unlike ocean tides, atmospheric tides are caused by solar heating stirring the sparse air at 100 km altitude. I see this as pressure that falls all day and recovers each night. Both Newton and Leibnitz reported similar observations over 100 years ago.